Andrew is IN THE OPEN!

Home/Uncategorized/Andrew is IN THE OPEN!

Andrew is IN THE OPEN!

Andrew has always been a pretty fit guy. He played cornerback in college and even made it to rookie mini-camp for the Redskins. He’s made a career in the football world, working in the front office for the Cleveland Browns and the Indianapolis Colts. He moved to Philadelphia in late February for a position as vice president of football operations with the Eagles.

He joined Fearless in July thinking it would be a short-term thing to change up the monotony of his existing routine. But he was struck by the friendliness of the coaches, the richness of the community, and the challenge and enjoyment of the workouts. As a newbie to the city, that deeper workout experience was just what he needed.

“The communal aspect of Fearless is probably the best piece,” he says. “The way you form a bond with everyone who suffers through the workout with you.”

He also likes the “constantly varied” nature of CrossFit.

“I love the daily variation. You go in, stuff is on the board and it’s a new challenge every day,” he says. “It’s really humbling because it’s both physically and mentally challenging and then there’s such a broad variety of skills you have to master.”

As a former football player, Andrew excels at lifts and running. He struggles with some of the other aspects of CrossFit, like gymnastic movements and double unders (“Some days I can string 15 together, other days I feel like I’m stumbling over my feet,” he says). But he has been quick to advance to RX for most workouts.

Andrew attends the 6 a.m. class in South Philly about four or five times a week (one of the few times during the day that a parent of two kids under age 3 can get a workout in!). When his coaches encouraged him to sign up for the Open, he was excited for the challenge.

“It’s been hard, but it’s been a lot of fun,” he says. “It’s a really nice benchmark for areas you can improve on.” 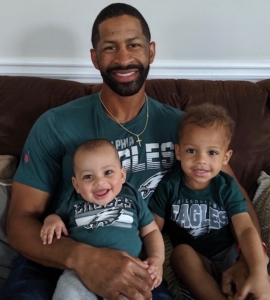